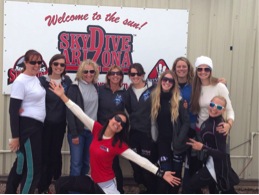 The Australian Representatives in the Women Vertical World Record 2013

4.5 years ago I was tightly strapped to the front of a skydiving tandem master tearing through the sky at 14,000 ft.

It was a promise I had made on an evening in a Manly bar over a few wines and a lot of laughs.

I never realised it would change my life.

I grew up in a small town in Switzerland exposed to all sort of high action sports. As a passionate downhill skier and lover of fast and furious activities I copped more than my fair share of injuries.  In 2000 I moved to Australia, leaving my winter mountains behind to experience Sydney’s summery beaches and waves. There I discovered the coastal lifestyle revolving around fitness and the water. I started to run half marathons and learned ocean ski paddling. Soon I started competing in ocean ski racing but my injuries soon came back to haunt me.

Over the years, Matt Geister, MGS Physiotherapist, supported me with all different kind of treatments (acupuncture, ultrasound, massages and exercises) to get me back in the ocean ski and on the running tracks. Additionally, Matt referred me to an experienced Pilates instructor which aligned the treatment with Matt’s approach. This combination offered me a holistic rehabilitation program to re-adjust my posture and to increase my strength, flexibility and balance in an effective way. Over time the frequency and severity of my injuries decreased dramatically.

As I landed that first skydive in 2009 I realised I wanted to learn to fly my own body, with my own parachute. Later that month I travelled to Hawaii for a short holiday and got my license. I felt like a bird!

However, I learnt that flying your body is a huge challenge requiring significant physical and mental strength. Just getting moving towards another skydiver to link up was so much harder than I had imagined!

After a few months in the sport, I decided to short-cut the normal progression of a new skydiver and to speed up my learning curve. I travelled to Arizona US and spent over 10 hours in a skydiving simulator or “wind-tunnel” which allowed me to train my body to fly in all kinds of positions – flat on my belly, on my back and vertically (head-down or sitting) – with a coach advising, supporting and challenging me.

At over 300km/h, head-down is one of the fastest body positions you can fly. The wind-tunnel is only 14 feet wide, so one mistake and you can be catapulted against the wall.

I was so determined to learn to fly head-down and 18 months ago I organised a second trip to Arizona, this time with additional coaching supporting me in the sky to apply the things I had learned in the wind tunnel. Although fear was and still is my biggest enemy, I was able to take it to the next level.

To my surprise, during this trip I was approached to participate in one of the World Record camps, preparing for the Women’s Vertical World Record, and finally to participate at the actual Record in November 2013.  My coaches and friends encouraged me to strive for it, even though it seemed out of my reach.  Most of the women have thousands of jumps, yet I have less than 500.  But I had my coaches and a mission to overcome my fear and physical limitations.  I believed I had a chance.

But then suddenly my plans were shattered. I was suffering from strained hamstring injuries on and off. During one particular landing in the preparation camp I stepped in a pot- hole and torn off my hamstring.  Surgery was certainly required and the timing as well as the rehabilitation was crucial. Matt Geister referred me to Sydney’s top hamstring surgeons and supported me on the way along the recovery. After 9 weeks of disciplined rehabilitation including Physio, Pilates and massages, I was flying again. Only 5 months after the surgery I was back in the US flying in the Women World Record team.

Although I was not able to participate in the final jump of the record, it was an incredible experience and one of my biggest highlights in this sport so far.

And the next challenge is just around the corner. I have qualified for the Australian Vertical Record Team leaving to Queensland this week with the aim to establish a new vertical record – 50 men and women holding hands while flying head-down in 300km/h.  Getting my last treatments from Matt prior our departure, I feel well prepared and ready to break this record with the team!

What are Shin Splints or Medial Tibial Stress Syndrome ?

What are Shin Splints or Medial Tibial Stress Syndrome ?