ITBFS is one of the most common causes of lateral (outer) knee pain and is an overuse type injury. 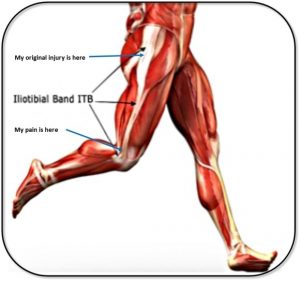 Anatomically speaking, the Iliotibial Band (ITB) is a long piece of connective tissue which runs from the hip to a bony point just below the level of the knee on the Tibia. When the knee is bent past 15-30 degrees, the ITB slides over the lateral knee and can become inflamed and irritable with repeated bending/straightening. With this in mind, it is most commonly seen in elite athletes such as runners and cyclists, but can also be seen in the everyday individual looking to stay fit.

So what is the underlying cause of ITBFS?

Essentially, altered hip/pelvic biomechanics will be the primary cause of ITBFS. Often you will find that certain muscles are being used in a greater or lesser capacity than they should be which will in turn create greater stress elsewhere down the biomechanical chain. In this case, the ITB is overloaded as it attempts to stabilise the hip and knee. Common de-stabilising patterns may include:

Typically we would expect a patient history to include evidence of overtraining, as mentioned above. Severity of the condition will vary, but commonly we would find localised swelling around the outer knee, painful early knee bending (especially when weight-bearing), sharp, throbbing or burning pain sensation, and a gradual onset of reported symptoms.

Can a physio diagnose ITBFS?

Yes we can! As mentioned earlier, there will be localised signs to suggest the presence of ITBFS and physios have a number of assessment techniques to confirm it’s presence. However, the key is to determine the underlying cause. You can expect your physio to perform a detailed biomechanical analysis of your movement patterns and pelvic flexibility and stability to help get to the root cause. The overall goal will be to de-load your ITB, which your physio can tailor to you, depending on what biomechanical abnormalities are discovered. The prognosis is very good with a conservative approach, so surgery is usually a last resort. If you suspect you have ITBFS, then give your physio a call and get cracking on getting yourself back to your best!