Running in and around Sydney presents a unique opportunity to run on a number of surfaces, however one question always seems to be raised – which is the most ideal surface to train on? This short article should help shed light on the pros and cons of each surface…

The most readily accessible of the surfaces would no doubt be concrete/asphalt. With a typically uniform surface and smooth running experience, the use of appropriate footwear will help to offset the unforgiving firmness. However, in cooler conditions the surface can increase in density causing greater shock on impact. Asphalt is more forgiving than concrete so if there are no other options around, stick with road running (and good shoes)! There has been much talk about the running shoes and how much (or little) support is needed. The Minimalist footwear movement has seen the likes of Nike Free, Newtons or Vibram type shoes and encourages less supportive footwear to make the foot muscles and joints have to work harder for the body. There is merit to many of these suggestions, yet predominantly when running on a softer more accommodating surface. Man has created an abundance of concrete surfaces which are run on daily. Many foot presentations are just not structured well enough to handle these surfaces with the less supportive footwear. This topic is currently quite controversial and well worth further discussion in one of our later issues. Moral of the story, get advice from your Physiotherapist. Poor foot mechanics, don’t wear minimalist shoes on concrete for running, or most importantly graduate into less support over time if you have been advised to do so. There are now even more options such as Hoka’s which support the foot in different ways again. All worth looking into when doing your research. Your MGS physio or or resident Podiatrist can help advise you which path to take.

If you’re lucky enough to live by the water then you’ll most likely have a lot of this stuff nearby! 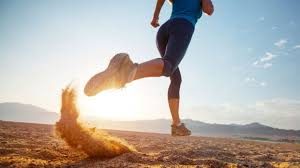 Long touted as the training surface of ironmen, you’ll be guaranteed to get a solid burn after exercising. Sand encourages the use of smaller stabiliser muscles in the legs meaning you will work harder than on asphalt. However, this also means you are using muscles you don’t typically use! As a result, the risk of overuse injuries rapidly increases, thus it is best to progressively build your intensity and duration. Take care to avoid beaches with fairly significant sideways camber or slope. Beaches like Dee Why to Longy, or Collaroy to Narrabeen have been great for business at MGS. Too much camber for too long a distance can load the outside knee and hip areas causing tendonitis and bursitis type symptoms. Try and find a level track higher up the beach, a good trick is to find a tractor tread from the Council grading tractors and stay in that if it’s not too compacted.

On face value it would seem grass is the best option – firm enough for impact but soft enough to give some natural shock absorption. And in most cases it is, provided the running surface is uniform and stable. When compared to sand, the intensity of the workout is less however the strain on your lower limb stabilisers will be significant less – this allows a quicker recovery. When compared to asphalt, foot pressure on impact is significantly reduced meaning you can run for longer. Unfortunately it is typically difficult to find easily accessible, uniform grassy areas for training purposes!

The convenience of a treadmill is difficult to overlook – running in an air-conditioned room in front of a TV, absolute control over the pace, duration and incline – what could be better? Well, unfortunately the repetitive nature of running means that a little environmental diversity doesn’t go astray. This is not part of the indoor running package. Furthermore, running over a motorised belt changes your running biomechanics, thus placing some body parts at a higher risk of injury.

Even if you are a competitive runner, diversity in running surfaces is an important aspect of training. Soft surfaces will help build your stabiliser muscles whilst hard surfaces can help build your running rhythm. So like in most things, variety is the spice of life!