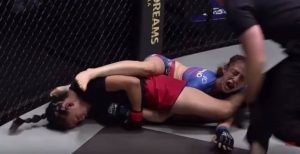 Professional OneFC fighter Natalie Hills shows what it takes to fight her way back to the ring after sustaining a nasty elbow injury from the dreaded arm bar finishing technique.

Natalie is one of the Northern Beaches top Atom Weight MMA fighters. She trains locally at Langes MMA school, being taught by some of the best including esteemed kickboxing/MMA coach Chad Lumley, also a loyal MGS Physio client when needed.

Three months ago during a recent Fight in Thailand  Natalie was defeated , having to submit at the hands of this commonly used technique. The pic above shows the pain and elbow angle she endured. From a Physio point of view we are pretty sure the elbow is not meant to bend that way. The end result is a torn Ulnar Collateral Ligament in the elbow.

Fortunately the surgeon decided that the damage sustained did not need surgical reconstruction, and sent her to MGS Physio for a program of treatment and rehabilitation.

The key to successful recovery was firstly managing the patient’s expectations. On her first visit Natalie was under the impression that after 6 weeks it would heal up and she would be back in the ring straight after that. Unfortunately that ligament is so important in maintaining the structural integrity of the elbow, the process for strengthening is more involved and complex.

Initial treatment involved the use of massage, dry needling and joint mobilisation techniques to reduce the pain, swelling and restore some elbow movement. But then began the lengthy process of re-building strength in all surrounding muscles not only in the foream and upper arm, but also her upper back, scapula and shoulder region to get her back, packing a punch worthy of a knockout.

Natalie has been an A1 patient, following all protocol and home exercise programs and is now well on her way to recovery. She now realises that it takes months to recover safely and is back training in controlled environment until her elbow regains its full strength again. This style of fighting may not be every ones cup of tea, but Natalie has plenty of passion and plenty of ticker. We wish her all the best for a successful recovery and future in the ring.

Moral of the story, heed the Rehab advice from your Physio and don’t rush back too soon from serious injuries. Returning too early often results in re-injury, and way more time off the sport than needed.